If you are interested in B2B SaaS companies, you will be interested in a recent list published by Battery Ventures.  Battery partnered with its portfolio company, Glassdoor, to publish a list entitled, “50 Highest Rated Private Cloud Companies to Work For.”  The list purports “to highlight the cloud-computing companies where employees report the highest levels of work satisfaction.”

The list centered on “private cloud companies that were B2B focused–instead of providing consumer services”.  It was not immediately clear to me why Battery chose a B2B SaaS focus, but Battery noted eight of its portfolio companies made the list, so perhaps that is reason!  In any case, those of us who are B2B nerds thank them for this bias!

To be included on the list, B2B SaaS companies also had to have:

(That last criterion also probably introduced a bit of the Battery Ventures and West Coast bias into the list.)

The article includes a good summary of the data, but I sliced the data slightly differently: 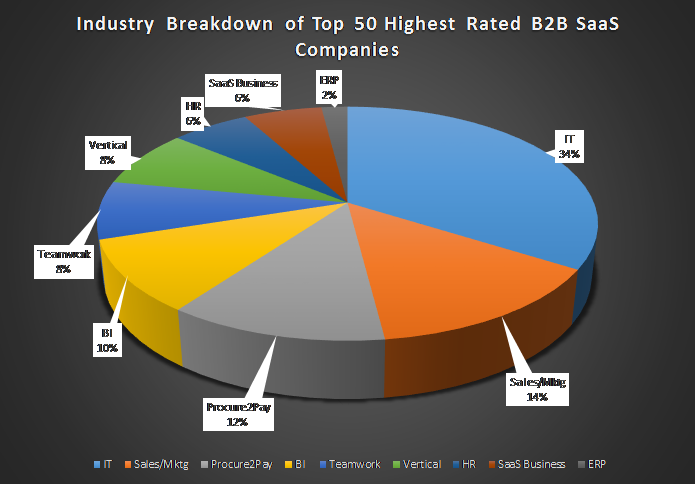 As you can see, the list contains many of the usual suspects in hot sectors:

More surprising to me was the inclusion on the list of six companies involved in the procure to pay space:

I have a special interest in vertical B2B Saas companies and the list includes four such companies:

I’ve already been watching some of these companies closely, looks like I will need to expand my horizons!