A few days ago, I posted about Ariba and Tradeshift’s unlikely “tete a tete” at Tradeshift’s event in Davos.  An alert reader kindly shared with me the approximately 1o minute video of the Skype conversation between Christian Lanng CEO of Tradeshift and Alex Atzberger, President of SAP Ariba, moderated by a CNBC journalist.

The video is amusing for several reasons:

The video is news-free (and not especially scintillating), but there is an interesting exchange towards the very end.  Forgive my poor transcription skills, but Christian said something resembling:

“As networks, we have to think about:  How we create better “interability”  (I put this word in quotes because I’m not sure what the word was). How can we bring these solutions together for our users and essentially for all the suppliers who are struggling with trying to deal with many solutions?”

This is a really important topic.  Alex responded with an example of connecting the SAP Ariba Network with another organization’s database to help end slavery in supply chains.  Alex added:

“I hope Christian and I will come up with good ideas in the future about how our companies can work together to come up with an open environment to actually move information forward and provide data to make the world run better.”

I’m not exactly sure how to interpret that noble sentiment.  Neither was Christian.  A clearly surprised Christian Lanng replied:

“Yeah, maybe we are kind of announcing, I don’t know breaking news here Alex, if we are going to talk “interability” (there’s that sort of word again) between Ariba and Tradeshift.  That would certainly be news within the industry.  But I agree with you, so let’s see if we can make that happen.”

It is a noble sentiment and very much-needed.  Big suppliers right now have to connect to a bunch of networks most of which do not interoperate.  The current situation is better than connecting 1:1 to each and every buyer, but it’s still a mess.  (Take a look at the chart in this post from lab supplier VWR.  Most of those procurement tools have their own “closed” networks.)

But interoperability between networks will not come easily.  Not just for technical reasons, but for commercial reasons as well.

Let’s take the case of Ariba and Tradeshift.  The two companies could undoubtedly figure out how to make POs and Invoices flow from one network to another by setting and adopting a few technical standards along with some mapping.  But suppose they did.  Tradeshift’s buyers could now have access to Ariba’s suppliers on the Ariba network to send POs and receive invoices without these suppliers having to register on, and interact directly, with the Tradeshift network.

If you are interested in the subject of interoperability between networks:

b) You might be interested in a presentation I put together on the issue or a post on the same subject.  (See here and here).  Interoperability is a recurring conundrum throughout the history of networks ranging from railroads, to pallets, to mobile phone network operators all the way to B2B POs and Invoices.  Here are just a few examples of networks that had to work through interoperability issues: 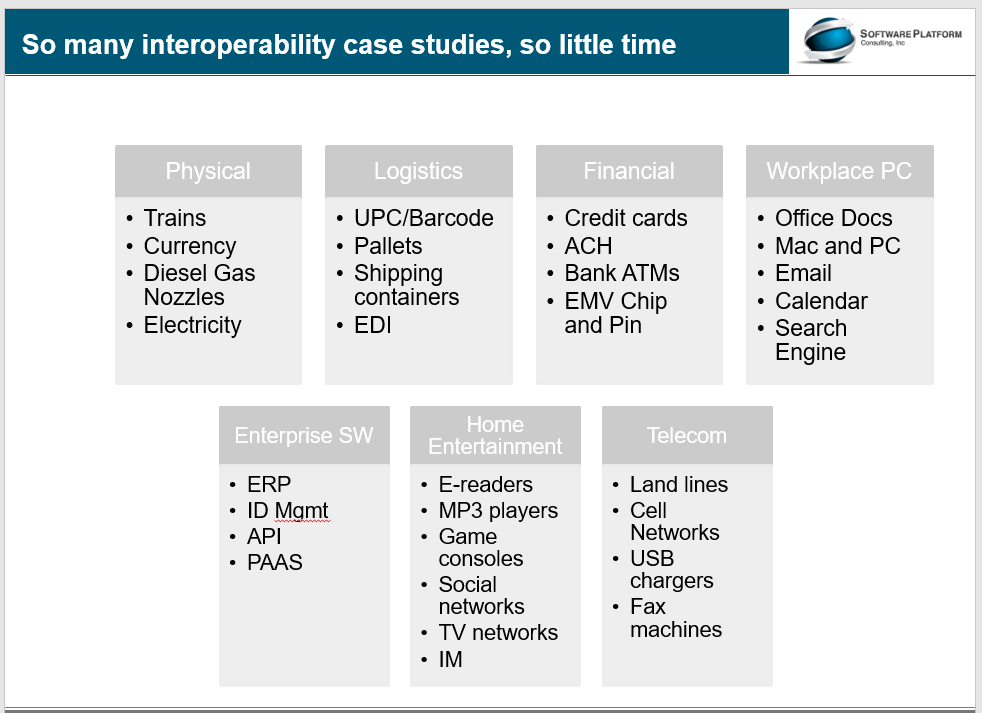 The bottom line is that interoperability gets talked about a lot and for a lot longer than suppliers want before it is achieved–if ever!