As Software Platforms Grow, So Do the Oligopolies

I love the word “oligoply”.  It’s a fancy word for a market structure in which a few companies have the large majority of market share.  The recent news reminds me just how many markets are becoming oligopolistic–especially those dominated by platform software.

Before We Get to Software…

Warren Buffett recently announced that he was buying airline stocks.  This is a man whose greatest quotes include many disparaging remarks about the airline industry (see here).  My favorite Buffett airline quote is:

Since our purchase, the economics of the airline industry have deteriorated at an alarming pace, accelerated by the kamikaze pricing tactics of certain carriers. The trouble this pricing has produced for all carriers illustrates an important truth: In a business selling a commodity-type product, it’s impossible to be a lot smarter than your dumbest competitor.
— Warren Buffett, in the 1990 Berkshire Hathaway shareholder letter

So why would the Oracle of Omaha invest in airlines now?   Because of another famous Warren Buffett quote I live by:

“The single most important decision in evaluating a business is pricing power,”  “If you’ve got the power to raise prices without losing business to a competitor, you’ve got a very good business. And if you have to have a prayer session before raising the price by 10 percent, then you’ve got a terrible business.”

Simply put, Buffett now thinks the airline industry is enough of an oligopoly for prices wars to abate. He says it in nicer ways, but that is the bottom line.

Whether it is through M&A, economies of scale, regulation, or network effects, industry concentration has increased in 75% of US industries over the last two decades (see here).   Healthcare is my favorite example, since it is 15-20% of our economy.  Fewer pharma companies battle fewer insurers (just listen to the Republicans) who battle fewer GPOs (representing the consolidating hospitals) who all battle fewer Pharmacy Benefit Managers.  Only doctors and patients remain fragmented!

Software platform-based industries are especially concentrated.  These businesses are famous for their “network effects”, which can lead to “winner-take-all” outcomes according to economists–and venture capitalists.  Of course, in practice, rather than a “winner-take-all, a few “winners-take-most” (see here).  This gives rise to, you guessed it, oligopolies.  And many of these oligopolies have been in the news lately.

Farhod Manjoo of the New York Times had a great article last week about what he calls the Frightful Five: Apple, Amazon, Google (Alphabet), Facebook, and Microsoft.  These are the five most valuable companies on the planet, all of which own software platforms.  These companies are battling it out in AI, voice recognition, “digital ownership” of our homes, self-driving cars, and virtual reality (a great oxymoron if there ever was one).

At the high-end, ERP and CRM are pretty concentrated markets.  And there are niches within vertical software that would make consumer software platforms envious in terms of concentration.  But, by and large, enterprise software markets are a little less concentrated than their consumer counterparts.  In fact, some markets are still highly fragmented:  martech, regtech, e-invoicing, enterprise payments, and others come to mind.  SAP, Oracle, IBM, Infor, Salesforce, and Microsoft are daunting, but there are so many enterprise applications and verticals that the big guys have less than 40% share of all enterprise software.  Thankfully, this complexity makes it a little more fertile ground for entrepreneurs and their investors. 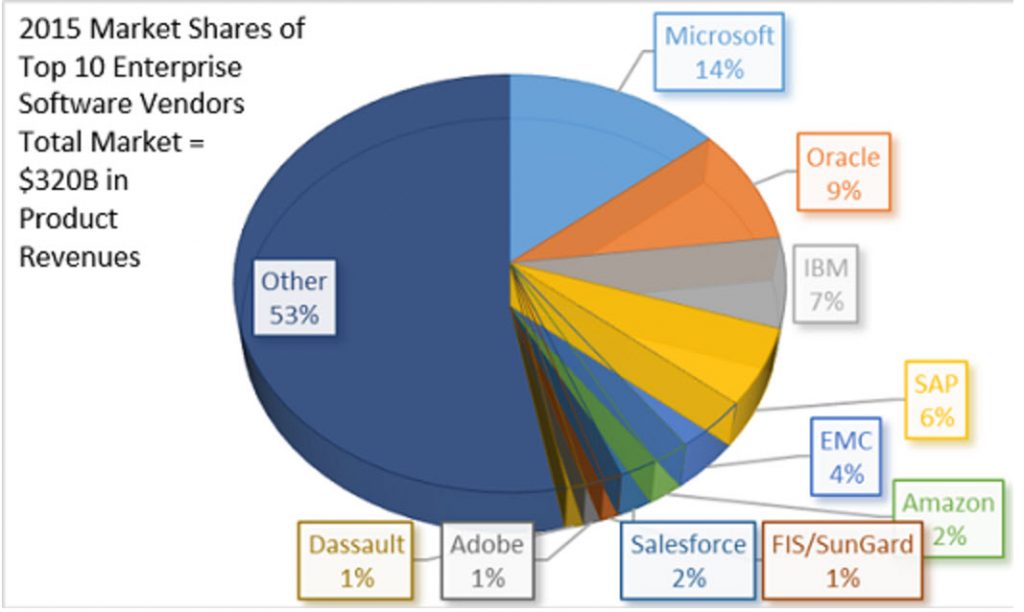