Software Platforms All Over the News This Week

If you follow software platforms, it was a busy week in the news.

2.  Peter Orszag (formerly of the OMB) and Jason Furman (head of the Council of Economic Advisers) recently released a paper with a title only an economist could love “A Firm-Level Perspective on the Role of Rents in the Rise in Inequality“.  The premise of the article (at the risk of butchering it completely) is that some of the rise in income inequality may come from a set of companies pulling a way from all other companies in terms of their return on invested capital.  In other words, income inequality may be rising because of disparities between companies–rather than wage disparity within companies.  (As the WSJ put it:  Is it executive pay practices driving inequality, or runaway success of some companies?)

The paper shows the dramatic gap between the top earning firms (in terms of ROIC) and everyone else.  See figure 8 from the paper below. 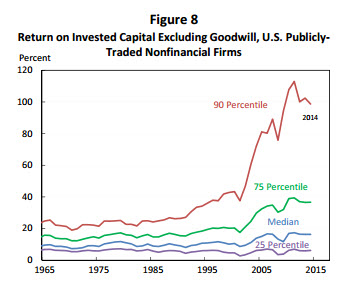 I’m trying to get a list of who those companies are in the 90th percentile.  I suspect, and a lot of other people do (see here and here), that more than their fair share of these companies are software platforms.

3.  In other news, Expedia agreed to acquire HomeAway, a vacation rental property platform for owners and travelers.  (Congrats to b-school classmate, Brian Sharples, founder and CEO of HomeAway. )  I had not followed HomeAway, as I always thought of it as a C2C marketplace.  But as I read the press release, I realized that, until now, the HomeAway’s business model had been based on ad listings by homeowners, rather than a commission model paid by buyers.  (Think Angie’s list versus Upwork, for instance. Interestingly, homeowner subscription renewals run about 72%–similar to subscriptions by buyer at Angie’s List.)

It turns out that simultaneous to the Expedia buyout, HomeAway will be phasing in the transactional model and easying up on the supplier listing fees.  From the press release:

“Today we’re announcing business model changes, including the addition of a traveler service fee in mid-2016, which will dramatically change our ability to compete and thrive in the coming years,” says Brian Sharples, chief executive officer of HomeAway. “Better monetization will allow us to accelerate revenue growth, but most importantly will provide more resources for an even better product and service experience for our owners, property managers and travelers.”  Mr. Sharples noted traveler service fee, which will be based on a sliding scale, will begin rolling out in Q2 of 2016 and is expected to add an average of roughly 6% to most transactions that run through its online shopping cart. In conjunction with the new traveler service fee, the Company plans to lower commission rates for most of their pay-per-booking customers and provide financial incentives to subscribers based on their annual booking volume through HomeAway’s platform.”

In other words, the company is going to a buyer “pay for transaction” model and lowering the supplier side listing fee.  This transition has happened time and time again in Matchmaker business models.  There’s pressure to move to “pay-for-performance” as who ever is paying to subscribe (buyer or supplier) wonders what value they are getting from eyeballs, but no takers!   Ebay, Mfg.com, Angie’s List, Global Spec, and many others have had to consider this issue.  Don’t get me wrong, these are enviable businesses, and so were the Yellow Pages for many years.  But in the face of Adwords and true exchange models, ad listing models tend to have a hard time.

Whose Data is it?

4.  The Wall Street Journal had a great article this week on how Chase and Wells Fargo are throttling back access to their sites by personal financial applications such as Mint.  Of course, these applications are simply using aggregation tools such as CashEdge (now FiServ) and Yodlee (which I have written about here, here, and here).

Chase and Wells Fargo variously complain about the impact of these software platforms on their servers and on the possibility of customer confidential data being compromised.  Both issues have some merit, though the latter rings a bit hollow given Chase’s breach of 83 million accounts last year.  This skirmish raises the interesting question of whose data is it–Chase’s or mine?  And under what circumstances can I access the data?  Can I only access my account data via browser manually, or can I use an agent of my choosing?  That battle is going to be fought over and over in the coming years.   I suspect in the long run Chase is likely to lose, though there may be rules put in place on these screen scrapers!