The answer to the latter two questions is “No.”  It turns out that the company is a wholly owned subsidiary of Posti Group which is the Finnish Post office (owned by the Finnish State).  Opus Capita is a 250M Euro provider of Order-to-Cash (A/R) and Procure to Pay (A/P) outsourcing.  Like Basware, it is located in the Helsinki suburb of Espoo–thus making Espoo, a town of 250,000 people the world’s epicenter with respect to e-invoicing.  Apparently, Finland is to e-invoicing as Italy is to pizza.  Who knew?

Here is how Opus Capita is described in the Posti Group annual report: 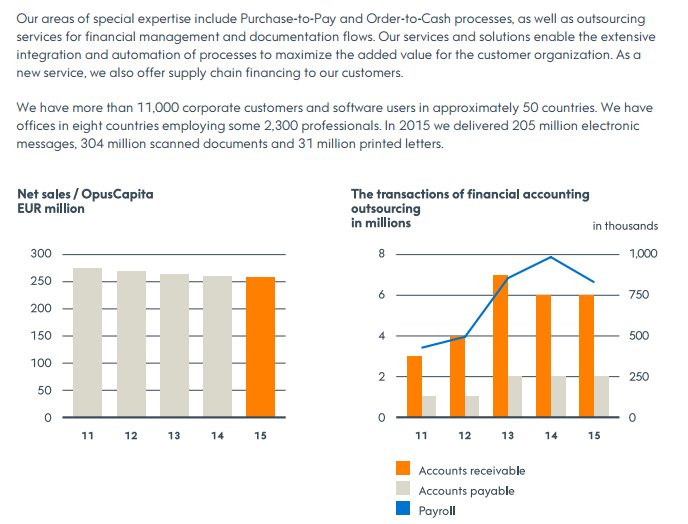 The company sounds like a cross between Billtrust and a typical A/R outsourcing operation!

From the charts, you can tell that Opus Capita is a much bigger player in e-billing (the sending of invoices by suppliers) rather than in the receiving–though the three measurements and two axes make it a little hard to read!  Their e-billing strategy is clear:  send all invoices, but migrate to paper over time.  Opus Capita is likely going to try to do the same on the buyer side of e-invoicing, but right now both paper and electronic means of receiving e-invoices are growing. 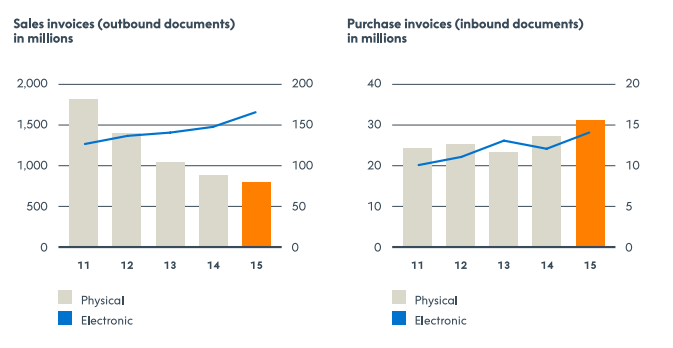 If you follow the e-invoicing market globally, you know that the Nordic countries have led the way and that 40% of all B2B/B2G invoices are already electronic in that region.  I was interested to read though that the Finnish parliament passed a law last year requiring that invoices between businesses be paid within 30 days!  That should drive the buyer side to automate!

History is replete with examples of industries developing in small domestic markets and then exporting their way to global success:

H/T to Greg Mark for alerting me to Opus Capita deal for jcatalog.