As you consider the world of software companies that serve businesses, especially in the supply chain arena, you typically consider only a small segment of that world.  For instance, given the excitement around cloud computing, you might consider only those providers who have SaaS offerings and disregard the legacy “behind the firewall providers”.  Other important variables you might consider would be:

An often overlooked variable is whether the provider’s solution incorporates a network effect and whether that effect is weak or strong.  True SaaS offerings offer economies of scale through the benefits of shared hardware and code, but these are not network effects.  Network effects only occur when the purchase of the solution by an additional customer of the platform benefits all other customers directly (and not just because the SaaS provider’s costs decline).

Many, but not nearly all, SaaS providers enjoy network effects.  Those providers with networks, specialized content contributed by users, ad models, marketplaces, or useful community applications enjoy these effects.   A primary example is in the supplier information management (SIM) space.  A provider who simply sells an on-demand portal for each buyer to upload their own supply base has a potentially nice SaaS solution, but a provider who allows suppliers to interact once with the platform for multiple buyers, or who aggregates supplier information, for use by all buyers, has introduced a network effect.

I’ve been trying to figure out a way to show all of these variables graphically and the results have been a mess.  Recently, I decided just to show the vertical solution providers separate from the horizontal providers and to segment the horizontal providers by the portion of the “analyze-to-pay process” in which they specialize.  (This, unfortunately, leaves the hybrid providers slightly mischaracterized.)  In any case, the result is the below graphic.  At the top are various industry verticals and the software providers who cater to that industry, regardless of the type of application they provide.  At the bottom, are the more written about horizontal players who span the entire analyze to pay spectrum. They are arranged largely along that spectrum.  At the very bottom are the EIPP players which are so numerous as to require their own, larger space.  Included are over 260 companies from around the world, with a predominance of North American providers.  They include network and non-networked providers. 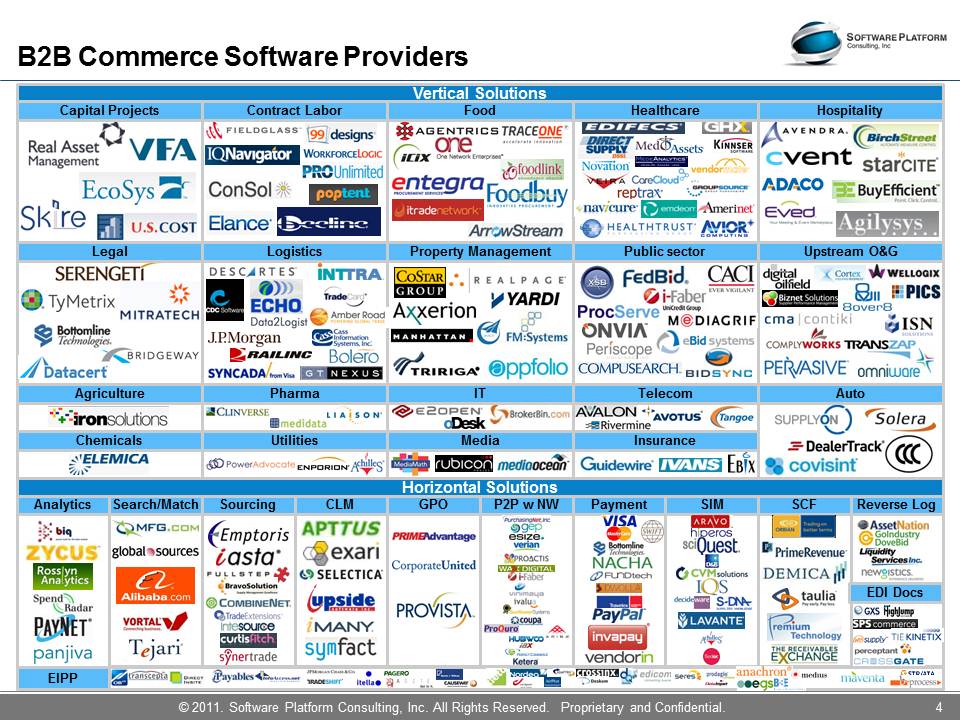 If you would like a large copy of the graphic, go to www.softwareplatform.net, fill out the information request form requesting the graphic and please add the name of a company you would like to be sure is on the graphic.  That way, we can create our own network effect!  Your comments, corrections, and edits are also most welcome.

Note that most of the vertical providers on the graphic have a built-in network effect in their business models. Some of the horizontal providers do as well, but many do not.  Someday I’ll try to do a graphic that includes this “networked” variable.  In the meantime, I’d suggest investors, entrepreneurs, product designers, and job-seekers, consider this variable carefully.  Amazingly, seemingly small product design considerations can create network opportunities or can foreclose them.  It’s obvious that many of the most successful cloud offerings on the consumer side of the business have strong network effects (e.g., Facebook), while some of the more questionable ones have weaker network effects (e.g., Groupon).  I suspect the same will be true in the cloud B2B world.

Network effects are by no means the only variable to consider, but the cloud is ideal for creating such effects. Many ventures confuse economies of scale or light, indirect effects with real, direct network effects which add value for users and build moats against competitors.