Banks have long been the dominant big players in the SCF market and trade finance generally. Traditional factoring has also been around and a large market for a long time.  (For instance, CIT factored $30 billion in 2018.)

The problem for fintechs has been using technology (and their non-bank regulatory status) to dislodge the existing bank players, invoice factors, and asset-based lenders or to expand greatly the percentage of outstanding receivables that “trade” in some way.  When it comes to payments, regulations, security concerns, and inertia have been an enormous barrier.

To date, one thing stands out about the enterprise early payments market as far as fintechs are concerned:  it’s that no fintech has broken out in a big way.

Heck, even the procure-to-pay (P2P) suites that have added dynamic discounting and SCF to their offering are not exactly crowing about.  Ariba is quiet on this front.  Coupa is nascent in payments.  The only P2P player that highlights payments is Tradeshift. Treasury management systems, such as Kyriba, also offer early payment functionality, but it does not appear to be a major part of their revenue.

In short, the market has not materialized in a huge way for any of the fintechs.  They are growing and making a dent, but they are not delivering the kind of growth that leads to excitement, huge capital raises and IPOs.  (To be fair, I am excluding from consideration the virtual card market.  Virtual cards have been very successful but are typically about rebates, not early payments.  I am also excluding from this analysis the merchant cash advance and small business lending market which is not enterprise-led.) 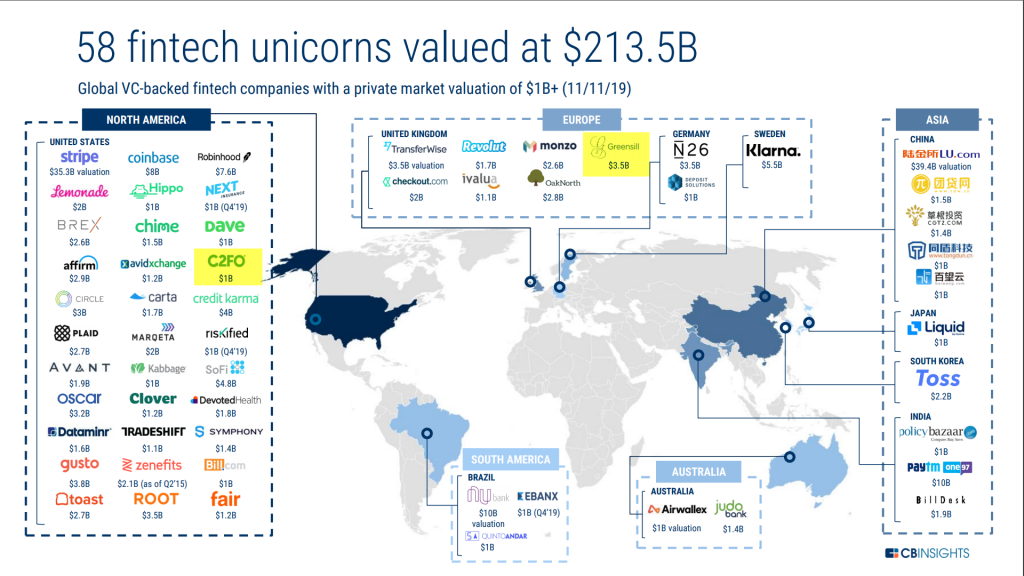 Despite, or perhaps because of, the lack of a breakout star in what everyone thinks is a huge market, the (in)famous Softbank Vision Fund (yes, the WeWork, Uber, and Oyo investors) has pumped more than $1.6 billion of capital into two enterprise early payments unicorns:  Greensill and C2FO.  The obvious question:  Is Softbank Vision fund visionary or deluded?!  Is this market worthy of two companies who have accepted $1.6 billion in capital?  Will the injection of capital overcome the inertia in the market?

Greensill started not by providing technology, it focused on providing capital to other platforms.  For instance, Greensill provided capital to Taulia and Textura (the latter of which was bought by Oracle). This past year the Softbank Vision fund pumped $1.455 Billion into Greensill.  Some of this money has been spent on a company called Finacity that helps Greensill perform securitization.  Prior investments seem to have also gone to buying a German bank. All of this seems to make sense and is positioning Greensill to scale.  The most recent investment seems to have gone to acquiring a company that will help Greensill enter into the alternative to the payday lending market.    Presumably, Greensill will also use some of that ample cash to build technology, so that it can more directly compete with the technology providers it once provided financing to.

There’s a lot written about Greensill and its jet-setting founder, Lex Greensill.  You can read about him here and here.  Let’s just say he seems to fit the Softbank Vision mold of an iconoclastic founder.  I don’t know Mr. Greensill, but I know some of his former associates. They are very bright, former bankers, and pioneers in the SCF space.

Dynamic discounting was introduced by Xign in the early 2000s.  C2FO started as a deliciously simple technology extension of dynamic discounting. C2FO made discounting even more dynamic by adding an auction element.   In C2FO’s model, suppliers would now bid for the limited capital available from their cash-rich buyers, rather than simply accept what offers buyers chose to make.  The principle sounds great; buyers get another chance at a discount for their products (and return on their cash) and suppliers get to set the price at which they want to get paid early.  If the program does not include an egregious terms extension, which SCF often does, it’s relatively supplier friendly.

From what I can tell, C2FO is very good at selling to treasurers, which many other firms are not. C2FO’s supplier marketing also looks excellent.  Of course, the constraint on the dynamic discount market is that not all buyers have the cash to pay early, and if they do, the capital is far more limited than what suppliers may want.  As a result, C2FO looks like it is now getting into other areas of financing.  Presumably, some of the $200 million Softbank Vision fund has invested in C2FO will facilitate this expansion.

Is there a charismatic, Softbank Vision-like founder at C2FO?  There’s a lot less written about C2FO’s founder, Sandy Kemper than there is about Lex Greensill.  Mr. Kemper was President of UMB Financial Corp., a regional bank that has been in his family for several generations.  He is better known, to me, as the founder of eScout and CEO of Perfect Commerce, which was a competitor during my Ariba years.  Perfect Commerce was eventually gobbled up and became part of what is now Proactis.

The only insightful story I could find about Softbank Vision Fund’s investment in C2FO was behind a paywall, but its title was a classic “How C2FO’s execs walked into a meeting with Softbank with no pitch deck, then landed $200 million within weeks“.  That headline probably sounded better before the WeWork debacle!

In the last bubble, Masayoshi Son, Softbank Vision’s founder, made some great investments and some terrible ones.  He likes to swing for the fences.  In this era, he’s most famous for at least two investments made based on limited interaction with visionary founders:  Adam Neumann at WeWork and Jack Ma at Alibaba.  The first investment has been an unmitigated disaster, the latter, some say, is the greatest venture investment of all time.    Will the investments in C2FO and Greensill turn out to be more like WeWork or more like Alibaba?  Will providing outsized capital to these two players, finally allow a fintech to overcome the inertia in the market and reach escape velocity.  Place your bets in the comments section!