This Post is Not About Tungsten Corporation’s Stock Price

I’ve previously covered e-invoicing vendor Tungsten Corporation’s stock price.  See here and here for just a taste.  This post is not about the stock price itself, it is about the coverage of the stock by the investment bank that took Tungsten public, Cannacord Genuity.

I do not know much about Canaccord Genuity, though I occasionally see its name.  And I do not mean to single out Cannacord, as what they are doing is done by most investment banks.  Nonetheless, it is amusing to watch Canaccord’s frequent press releases on the target stock price for Tungsten Corporation. First, note that Canaccord has maintained a Buy rating on the stock since the IPO in October, 2013.  Second, check out this chart of the major calls Canaccord has made on Tungsten Corporation’s stock since its IPO: 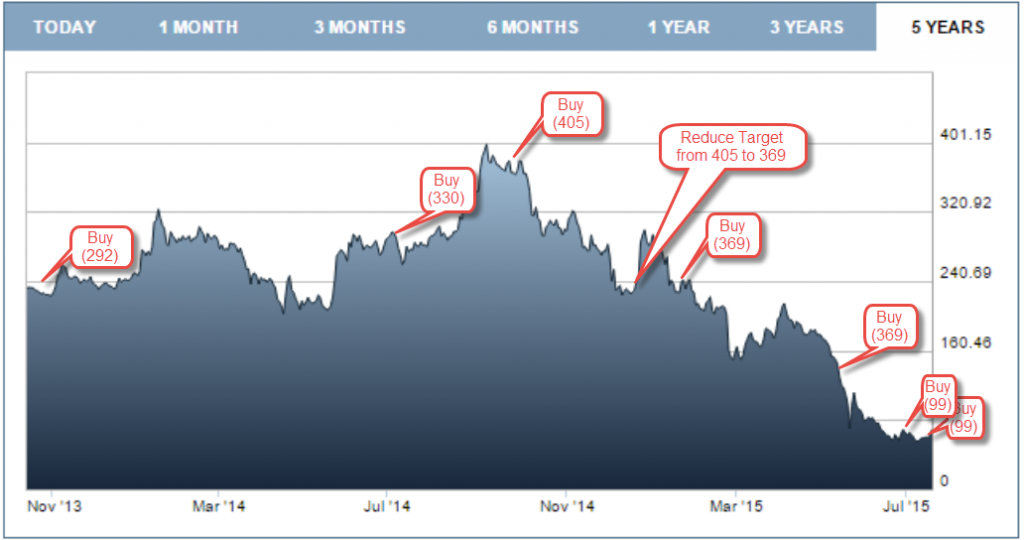 For the first year after the IPO, investors made good money following Canaccord’s advice.  Since the peak, not so much! At one point when 369 was a distant memory, Canaccord quietly lowered the target to 99, but kept a Buy rating.

Elliot Spitzer made his name pointing out behavior like this by investment banks in the US (before the prostitute scandal).  Apparently, the UK AIM plays by different rules.