In the last post, I wrote that B2B networks, marketplaces, and Industry in the Cloud (IC) platforms tend to grow like flywheels, rather than like viruses with “tipping points”.  One of the reasons for this, as anyone who has sold software to a business knows, is that business decision-making and change management are an effective antidote to anything resembling a virus!

As I was making an Open Table reservation on my android phone, I recalled that Open Table had gone public and thought its growth pattern might be interesting to review.  Open Table is a classic B2C platform.  On the “B” side Open Table engages the quintessential small business–restaurants.  And for restaurants, Open Table presents a limited change management challenge.  (For the restaurant, the application replaces typically only the paper reservation book that most restaurants have at the entrance and any web reservation system the restaurant might already have.)  It is hardly an “ERP”-type sales and change-management process.

Open Table sells a restaurant a terminal (uh-oh, something physical) and an electronic reservation book (ERB).  It costs $200-$700 to install and $199/month.  Open Table also charges $0.25 – $7.50 per reservation depending on the type of reservation.  For consumers making reservations, it is, of course, free.  Not much of a barrier there!

What did the growth look like?  Open Table began operations in 1998 and went public in 2009.  I can only find operational and financial data beginning in 2004.  After its first 5-6 years–Open Table was only in 2423 restaurants–that’s about 1 restaurant per day.  That had to feel like a slog!  Since then, Open Table has delivered six more years of a relatively consistent 36% compounded annual growth rate (CAGR)–which is a really cool flywheel.  It looks like this: 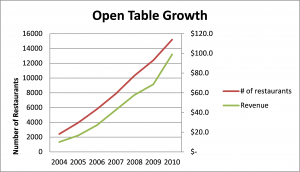 Add on the first 5+ years to get to the first set of 2423 restaurants and you get a fairly typical “flywheel”-type chart.  Someday if I have time it would be interesting to superimpose the growth rates over time of various types of public companies, including:

B2B Enterprise platforms, B2B Mid/Small company platforms, B2C platforms, and finally C2C platforms.  I could throw LinkedIn somewhere towards the end of that spectrum since it is basically C2C with a B2B twist.  We would see some pretty neat ‘S” curves which are the basis of Geoffrey Moore’s “Crossing the Chasm” theory of growth.  And I suspect, we would see that the more the platforms stay away from large companies the faster they grow.  B2B is not for those who lack patience.

Having said that, the beauty of enterprise platforms is that for the same reasons that they grow slowly, they can grow for a long time — and they are a lot stickier than C2C platforms.  EDI being a quintessential example.  Many thought the Internet would kill the EDI industry behemoths (e.g., GXS and Sterling) like a meteor hitting dinosaurs.  They certainly stopped growing revenue-wise (finally), but they also certainly survived as highly profitable ventures.  Indeed, EDI could have thrived if they had moved faster and bolder up the value chain (more on that in a future post).  In the meantime, Friendster and MySpace, not to mention most of the search engines other than Google, showed that what grows really fast in the C2C environment can collapse just as fast.