The Forrester Wave™: eProcurement Platforms, Q4 2019 has arrived.  As always, it’s fun to see who the analysts say is “up” and who is “down”.  You can access the entire report here.

Below is the “money shot”.  I added market valuations where they are available. 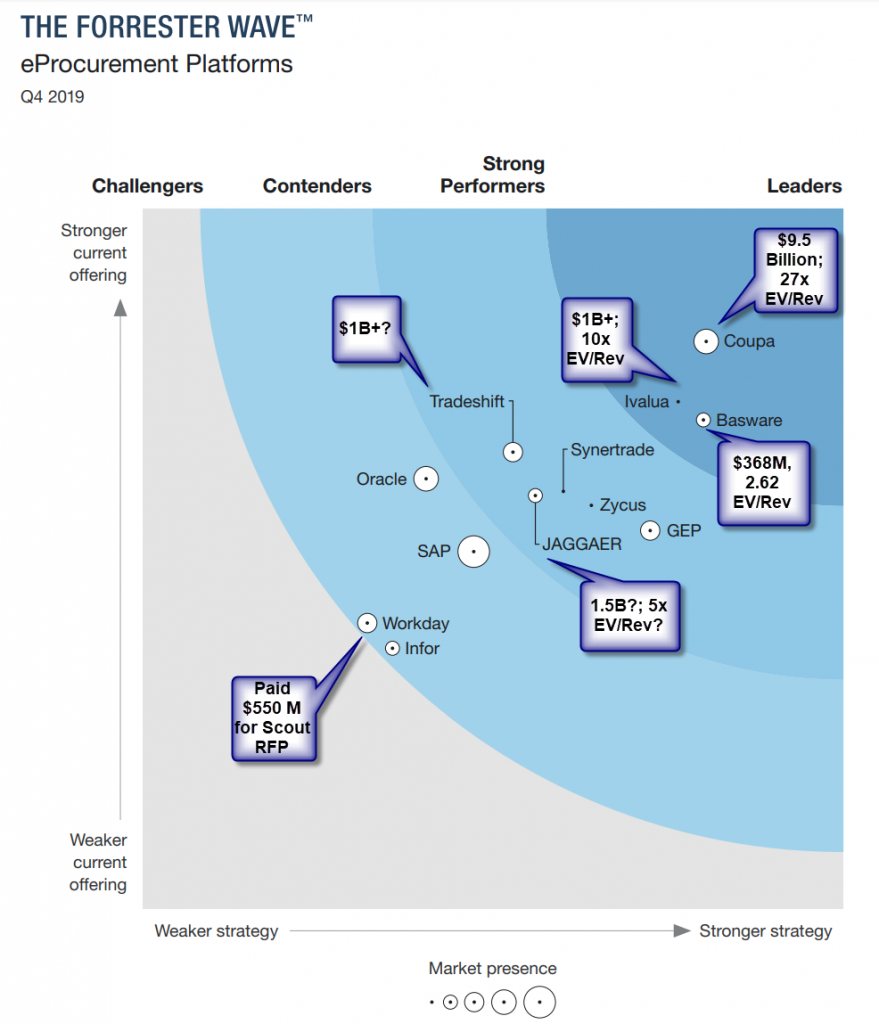 (Note:  Basware and Coupa’s market caps are public.  I estimated valuations for Tradeshift, Ivalua, and Jaggaer based on published reports.)

Coupa dominates the report, but two other companies really stand out:  Basware and SAP.

Basware stands out because it has a highly-rated product, but it has a single-digit growth rate and minimal EBITDA.  As a result, Basware has a tiny market cap relative to its size.  Basware’s enterprise value is less than 3x its revenue, while several other companies in this sector trade for several multiples of that.  It’s no wonder that Tradeshift tried to buy Basware.

Boy, there have to be some pretty upset people in Walldorf.  SAP, the inventor and market share leader of e-procurement, ended up in the lowest category, “contender”, in this report.  Are there any other Forrester Waves, where the market leader is tied for the lowest rating?  Either Forrester is off its rocker,  SAP has managed to really destroy its offering or both.  I suspect it is a bit of both.

As a former Aribian, it is sad to see this rating of the SAP offering.  On the other hand, I remember vividly in May 2001, when Gartner placed Ariba on its “watch list” and stated the following:

Existing Ariba customers should minimise their investment in the company’s e-procurement solution, and potential customers should select that solution only if they are protected from fallout from a possible Ariba acquisition, according to a Gartner report scheduled to be released this week.  Gartner has placed Ariba on its “problem watch” list, which the analyst firm reserves for vendors with solutions where the risk of buying the software is greater than the potential benefits, according to a copy of the report obtained by InfoWorld.

Note that Ariba was acquired 13 years later for $4.5 billion.  In the meantime, many of the companies Gartner was not worried about went out of business. CommerceOne, for instance, filed for bankruptcy within three years.

At the time I was relatively new to the software industry, so this was one of my first exposures to the software analyst world.  It was such a ridiculous statement at the time and so laughably wrong,  it forever made me take analyst reports with a grain of salt.  Do the same with bloggers, of course!