Yesterday, Aramark announced that it was acquiring Avendra, the hospitality GPO, for $1.35 billion.  If you are not familiar with Avendra, you are not alone.  Avendra was formed in early 2001 when the old guard, “industry consortia”, were seeking revenge on “dotcom” interlopers.   Avendra was formed by Marriott, Hyatt, ClubCorp, Fairmont, and Intercontinental to handle contracting for these, and other hotel chains, in return for a 2-3% administrative fee.  That is the basic business model of a GPO.

A popular maxim among VCs these days is T2D3.   T2D3 suggests that after a SaaS company reaches its first $1 MM in ARR it should triple revenues in the next two years (T2) and then double revenues in each of the next three years (D3).  This “T2D3” math yields $100M in ARR after five years.  Avendra did not come close to this growth rate.  I’m guessing Avendra reached the $100 million revenue threshold in 2013 or 2014, after 13-14 years.  (In fact, during its early years Avendra was the subject mainly of controversy (and lawsuits) regarding vendor rebates–an issue healthcare GPOs have had to answer as well!))

A great recent article by Openview Partners shows, however, just how rare T2D3 growth is.  Openview points out that only two of the last ten enterprise SaaS IPOs grew at a pace consistent with T2D3.  And those two companies burned through a collective $1.4 billion in capital to do so.  (The rest of the IPO candidates took 6-14 years to reach $100 million in ARR as shown below.)

Avendra’s path to $100 million in revenue puts it over by Blackline in the diagram above.  On the other hand, Avendra reached that milestone by taking on only about $25 million in total capital.  That’s right, Marriott invested $13 million for its nearly 55% stake in Avendra and will net $650 million from the sale.  (This return does not even include Avendra’s dividends which alone exceeded Marriott’s initial investment.)  Not a bad ROI. Where I come from the ROIC matters more than the time it takes to get to $100 million in ARR!

(In case you are looking to make a little money, the other shareholders splitting the total payout of $1.3 billion are:

“IHG was a founding shareholder in Avendra and has a 6.3% minority interest with a book value of $2.1m, but has not been an active user of its services in recent years.  On completion of the transaction IHG expects to receive gross cash proceeds of approximately $74m, with estimated post tax proceeds of $44m.  In addition, IHG will no longer receive an annual dividend distribution from Avendra, this has averaged $3.5m over the past two years.

Avendra, like several other GPOs, is very profitable.  Avendra’s P&L was publicly available on the web.  As you can see below, Avendra had net income margins of about 48% and EBITDA margins of just over 50%. 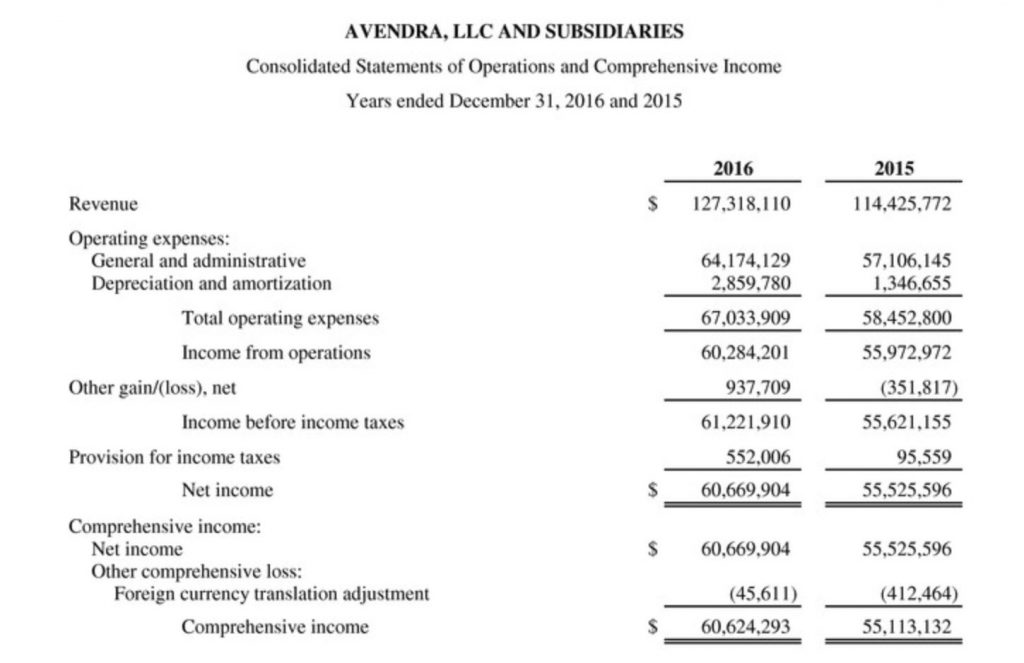 I draw two conclusions from the acquisition of Avendra.