As taxpayers, we should want to know how well our dollars are spent.  At the Federal level, most of these dollars are spent on social security, healthcare, and defense (see below).  Articles about spending in these areas are easy to find, but the price of F-35s or my dad’s medicare is too complex for this blog.  Instead, let’s focus on the prices paid for common commercial catalog items that we can all relate to. 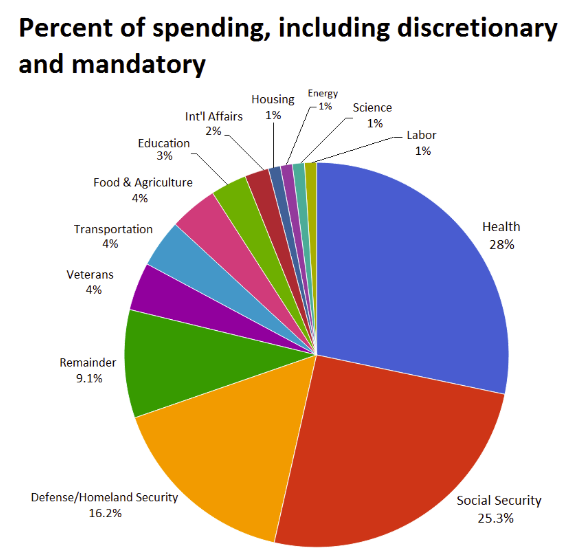 According to the General Services Administration (GSA) the federal government buys at least $5 billion in commercial catalog items annually (see here).  If you add in the spending by the Department of Veteran’s Affairs (VA), you get another few billion dollars.  Then add in spending on commercial catalog items by state, local and public higher education and you easily get to $20 billion+.  It’s chump change in some ways, but a billion here, a billion there…

The GSA as a Group Purchasing Organization (GPO)

Let’s start with some over-simplified background about Federal procurement.  Think of the GSA as the federal government’s GPO for indirect goods and services.  The GSA, among other duties, establishes contracts (“schedules”) for most of the agencies to buy from.  (The VA has its own group to perform this function for their system. The defense department, also has its own group, the Defense Logistics Agency, for its consumables. Is this duplicative? Yes, but welcome to the federal government.)

The GSA resembles a GPO in several ways.  The GSA:

What do GSA Prices Represent?

There’s a lot of confusion about what GSA schedule pricing represents.  The GSA is supposed to obtain the contractors’ “most favored customer” pricing/discounts under similar conditions.  GSA contracts also have a “price reduction clause” in case a vendor begins to discount aggressively in the commercial market.  So while GSA has some “hammers”, its schedule program does not commit volumes and negotiate volume discounts.  GSA prices are considered ceiling prices.  In addition, the “similar conditions” clause leaves a loophole many vendors drive a truck through.  As the GSA notes:

To ensure that they receive the best value at the lowest overall cost when using Schedule contracts, agencies are always encouraged and empowered to seek price reductions at any time before placing an order. By seeking discounts on all orders, the government can take advantage of flexible and dynamic pricing in the commercial marketplace.

SLED buyers negotiate their own contracts and they form cooperative buying groups (GPOs) to leverage their buying power and negotiate better deals.  (Common GPOs in the SLED market include NASPO, US Communities and National IPA (the latter two are owned by Omnia)).  Most SLED buyers can also buy from two of the GSA Schedules (70 and 84), which are called co-operative purchasing agreements. These schedules cover IT and security and law enforcement equipment.

How do SLED Prices compare to GSA prices?

The great news about public procurement market is that because our money is being spent, the prices paid are slightly more transparent than those paid by corporations. (The prices should be totally transparent, but that issue is for another blog post.) Luckily, your faithful blogger is on the board of a data science company, XSB, that knows how to collect this data and has the requisite AI skills to make sense of it.  AI is required because the exact same item is often described quite differently by different vendors and distributors.  Brands, product descriptors, package sizes, parts numbers, etc. are also often incomplete in ERP or procurement systems.  XSB takes care of these vexing issues for us and government buyers.

As a federal taxpayer, you will be happy to know that XSB has long helped the GSA negotiate better prices.  According to XSB:

“Contracting Officers have effectively used XSB Price Point® benchmarking data to re-negotiate contracted prices for millions of catalog items. We estimate that this resulted in on average, a 12% reduction in pricing for high volume items. Such a reduction could easily translate into millions
of dollars in avoided costs for government buyers.”

XSB has now collected data from 103 SLED data sources.  XSB identified $200 million in spending across 1 million items purchased by SLED institutions that are also on the GSA Schedules.  The company found:

My first conclusion from the data is that there is still surprising price variability for commodity items bought in low quantities and for which there is typically no volume commitment.  In addition, as a state and local taxpayer, I’d like to see the SLED institutions buying off the federal contracts, not spending time on sourcing the same items, and certainly not paying more for these same items!  The data also suggest that the co-ops that support the SLED market have some work to do on some of their contracts.  Having said that GSA clearly has some work to do as they are not nearly always the best price.

Just for fun here are the top 10 most frequently purchased items that are common to federal and SLED buyers.  Batteries, wipes, traffic cones, software, and black Sharpies!  (No Sharpie jokes please!)