Deja-Vu: Enterprise Software (Even Source to Pay) is Red-Hot Again

Deja Vu All Over Again:  A Keith Krach IPO 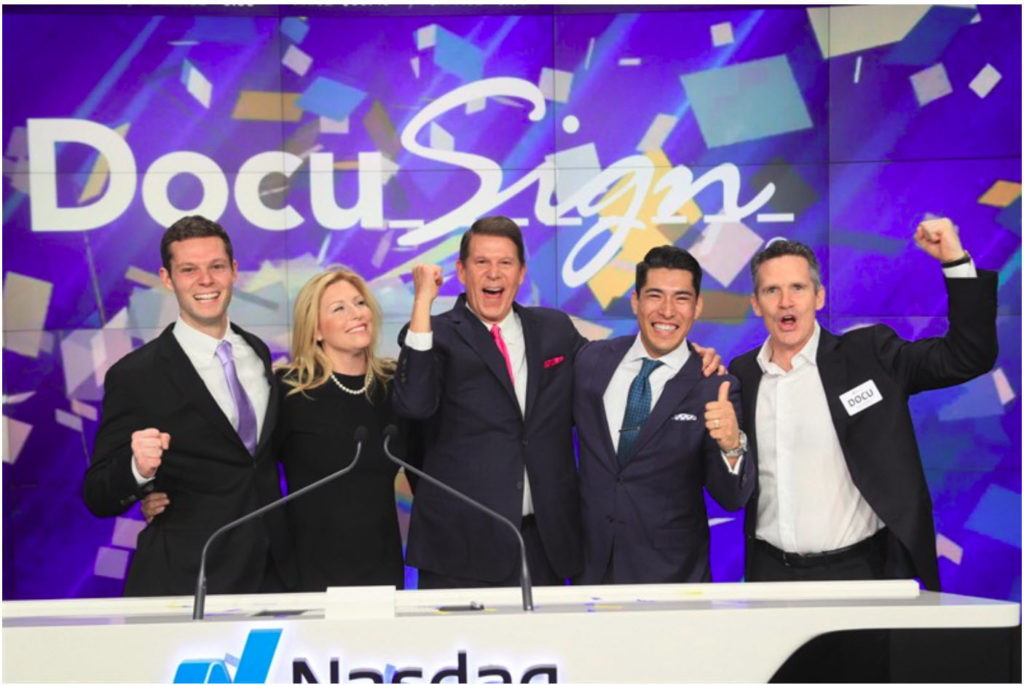 Keith Krach (center above)  a founder of Ariba, took DocuSign public. DocuSign finished the day with a $6 billion market cap. Much has been written about DocuSign, but to me, the most interesting part of the story is that it was founded in 2003 and is still losing money.  Building a new way to get signatures on documents takes a long time!

(BTW, Ariba sported a market cap of $3.8 billion on its first day of trading and eventually sported a peak market cap of $40 billion in the fall of 2000.  When sold to SAP may years later, Ariba’s market cap was not far from its IPO price!)

We Need Another Collaboration Tool!

Not to be outdone, Smartsheet also went public reaching a market cap of $2 billion.  Smartsheet also loses money but sees itself growing through its Dropbox-like network effect and ability to replace Excel and Word for project tracking tasks. Add Smartsheet to my Slack, Trello, and Google Docs tools.

The parade of enterprise IPOs I have not written about also includes Pivotal, Zscaler, Zuora, and Ceridian.  You want to talk about deja vu?!  Ceridian has been around since it was part of Control Data Corporation.  I’m not even sure how many times it has previously been public.  But take a payroll provider and call it Human Capital Management and boom! 😉

“As COUP’s supplier network, systems integrator ecosystem and product capabilities continue to expand, we believe it will be challenging for new competition to emerge from legacy vendors or from venture-backed startups.”

It’s quite true, but it sure did sound like what we used to say about Ariba.  To top it off, Coupa announced it was “laying claim to the acronym BSM, for Business Spend Management.”  It’s not clear to me if this was said with tongue planted firmly in cheek or not.

Two weeks ago, Xeeva, a source to pay vendor touting its AI patents raised $40 million.  Xeeva’s tech and the marketing sound great and the company clearly has a strong position in the auto industry.  But source to pay is a crowded space and almost every source to pay vendor now touts AI. See Suplari, Sievo, Coupa, and even the old-timers like SAPAriba and Zycus.  AI/Machine Learning etc. are now simply table stakes in the source to pay world.Consultants and analysts tell me that the e-procurement market is hotter than a pistol.  It’s all about Digital Transformation.

One of the great joys of being a grizzled veteran of this market is seeing old wine in new bottles!