Unless you are a true B2B software nerd (which many of you are), you just thought to yourself, “Who bought who?”  After all, neither the acquirer nor the acquiree is exactly a household name.  Nonetheless, Verisk Analytics and PowerAdvocate are great businesses and archetypes of industry big data plays.  Entrepreneurs and investors have much to learn from these companies.

The acquiree, PowerAdvocate, is described in the press release as follows:

PowerAdvocate’s proprietary, one-of-a-kind spend and cost data is curated from millions of transactions across thousands of services, materials, and equipment categories in the energy industry…Through its proprietary data set encompassing $2.7 trillion of spending data, and machine-learned methods, the company brings transparency to otherwise opaque markets and ensures that capital can be deployed in an efficient manner.

In more common lingo, PowerAdvocate is a specialized sourcing and spend analytics company focused on one gigantic vertical, energy.  By virtue of their verticalization:

I am ashamed to admit that I was only vaguely aware of Verisk Analytics before this announcement.  But I’m not the only one.  When a great enterprise software VC recently asked on LinkedIn for “the best/most clever examples of a B2B company with their own proprietary dataset”  the answers included:

These are all great answers.   But, Verisk Analytics did not rate a mention!

There are a few reasons Verisk is not well known among B2B folks: 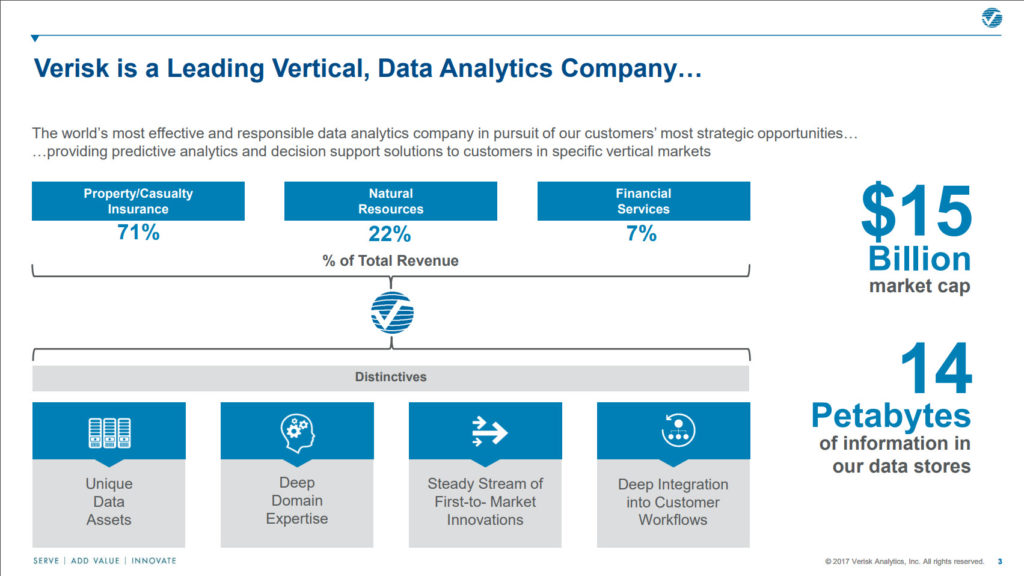 For those of you interested in financial metrics, this is one of those rare instances when the terms of the deal were disclosed! Key valuation statistics for the deal are:

It looks like a great deal for everyone.  Congrats to CEO Dan Sullivan, CRO Mark McVay, and the entire PowerAdvocate team.  It could not happen to a better, more dedicated set of people.