Established in 1995, Angie’s List was the pioneer in the home services marketplace.  Home Advisor (IAC) announced last week it is acquiring Angie’s List (ANGI) for more than $500 million.  (This price represents a 44% premium over Angie’s List’s depleted closing stock price (see below)).  I am sad to see Angie’s List go. 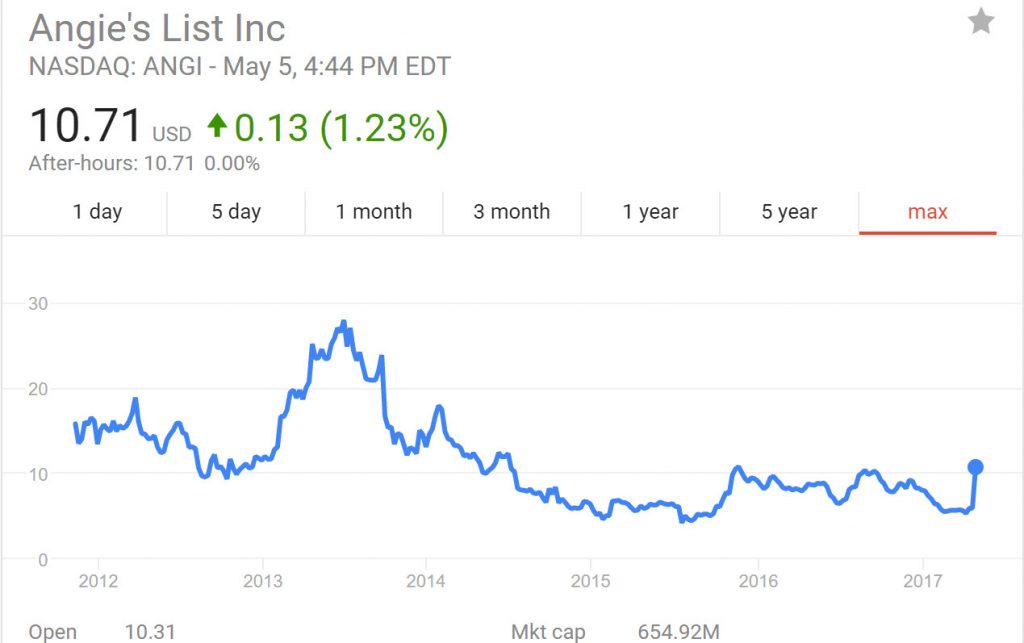 Triumph of the One-Sided Pricing Plan

Angie’s business model was a prominent differentiator from its competition in the home services market.  As you may know (see here), Angie’s List charged buyers (homeowners) to participate in its platform. (Angie’s List also charged contractors to advertise on the platform.)  Angie’s competitors (e.g., Thumbtack, HomeAdvisor, Yelp, etc.) tended to be free for buyers and charged contractors some variant of listing, lead, and/or transaction fees.

Last year, Angie abandoned her two-sided pricing strategy. But the change in business model, along with technology upgrade issues, meant a decline in Angie’s buyer and supplier revenue.   HomeAdvisor, which had previously tried to buy Angie’s list, finally swooped in and picked up the company.

Angie’s List’s pricing model contributed to, but was not the only reason for, its struggles. The buyer-pay model put a drag on buyer growth, without contributing enough revenue to warrant the friction the model created.

But Did the “Right” Business Model Win?  The Contractor Perspective.

The saddest part about the disappearance of Angie’s List is that the company’s business model possibly did create a better community.  Contractors I’ve spoken with (an unscientific sample) preferred Angie’s customers. These contractors believe Angie’s buyers are more serious than buyers on other sites, as evidenced by their willingness to pay to join the community.  (Perhaps this “willingness to pay” also means Angie’s buyers are less price sensitive?)  Further evidence that Angie’s List is favored by contractors versus HomeAdvisor comes from the two companies’ respective BBB ratings.  Among contractors, Angie’s List scores higher in BBB ratings than HomeAdvisor.

But Did the “Right” Business Model Win?  The Homeowner’s Perspective.

My experiences as a homeowner on Angie’s List were superior to those I had on the other sites. Angie’s reviews were demonstrably better.  Also a friend who recently used HomeAdvisor hired a contractor who routinely pocketed deposits without doing the work, then disappeared.  A former employee of the contractor told my friend the reviews on HomeAdvisor do not reflect this contractor’s “take-the-deposit-and-run” strategy because he “threatens HomeAdvisor with pulling his advertising fees” if the bad review is posted. This anecdote may or may not be true, but a quick Google search of “HomeAdvisor complaints” finds much more noise around HomeAdvisor than Angie’s List. 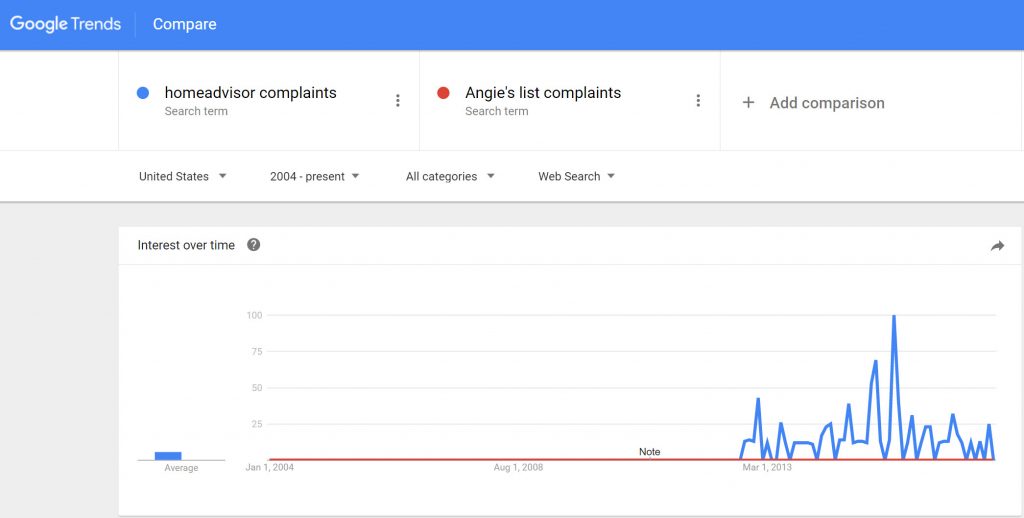 It should also be noted that a few years ago HomeAdvisor changed its name from ServiceMagic.  A persistent rumor ascribed this change, in part, to the terrible reputation ServiceMagic had developed among consumers and contractors alike.

In the end, the business model with less buy side friction, HomeAdvisor,  “won”.   But the quality of the interactions on HomeAdvisor’s marketplace may actually be lower than those on Angie’s List, even if the quantity is greater.  Anyone who has studied platforms, or standards, knows that it is not the “best” platform or format that always wins.   The platform that wins is the one that wins the adoption war!  HomeAdvisor won the adoption war by appealing to our desire for “free” things; a desire we maintain perhaps even to our own detriment!

Now that HomeAdvisor has bought Angie, hopefully HomeAdvisor will figure out a way to keep the buy side free, but improve the quality of the interactions in their community!