Upwork, as you may know, is the company that resulted from the merger of two freelance labor marketplaces, Odesk and Elance (see here).   Upwork is a very useful site for finding freelancers, but has struggled with the same issues all marketplaces do:

Upwork’s new pricing demonstrates attempts to deal with all of these issues.  Here is the email I received–almost in its entirety. 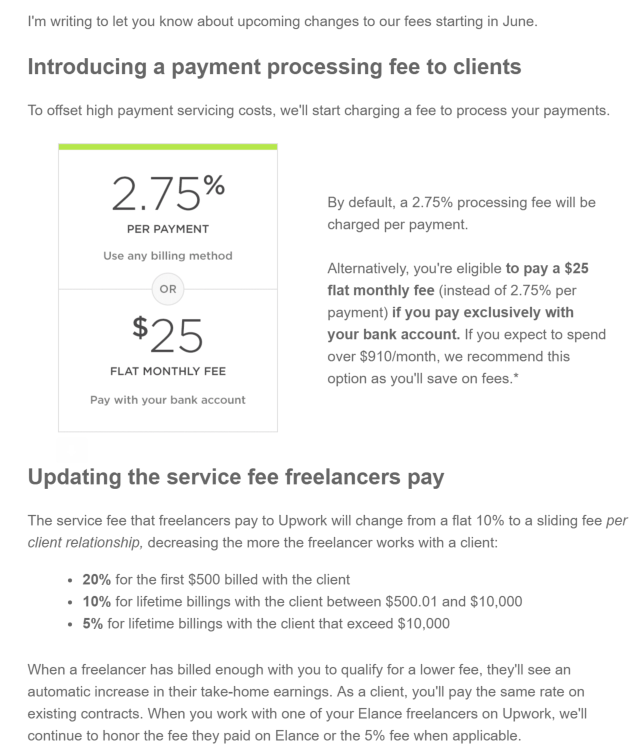 1.  Buyer Fees.  Note that Upwork now plans to charge the buyer a payment processing fee.  Such a fee is fairly common, though it is more usually charged to the supplier, especially the credit card fee.  (By the way, $25 per month for ACH processing is pretty steep.) Either way this establishes a fee for buyers, but does not force them to pay to play– an approach which even Angie’s List recently dropped.

2.  Take Rate.  Upwork’s take rate has traditionally been a flat 10%, meaning the marketplace took 10% of what the buyer paid before passing the other 90% on to the supplier.  As you can see, Upwork is increasing the take rate on the first $500 (to 20%) and reducing the take rate to 5% as relationships grow.  This change is designed to better fit with the value a marketplace provides: the introduction.  The change also lessens the incentive for buyer-supplier pairs to go “off-market” once they have established a relationship.  The new plan reduces the perception that a take rate of 10% forever is unfair. After all, forever is a very long time!

3.  Transparency.  Elance and Odesk moved to a reasonably transparent model a while back, following the eBay-type precedent.  That is, the buyer sees a price that includes the take rate and then the marketplace takes its cut, rather than showing a supplier price plus a mark-up.  Transparent, but not in your face!  The buyer can easily see what the middleman gets, but is not constantly reminded.  Note that Upwork is clear to point out that buyer will always see one rate and Upwork will simply reduce its take to increase the net amount the supplier receives.

The Net Effect of the Pricing Change?

That’s the beauty of “upcoming changes to our fees”.  This change is not billed as a price increase–and is certainly not billed as a price decrease.  So what is your guess about the net effect of these changes?  I suspect if it were a price decrease Upwork would be tempted to market this fact rather heavily–and they are not. I also suspect the company is named Upwork for a reason–as in the prices of work are going Up!  The processing fees, alone, are a substantial new addition and based on the shape and nature of their relationships, the sliding scale probably represents a net price increase as well.

Changing prices in an ecosystem is not an easy thing to do, so it will be interesting to watch how the community reacts and how well Upwork manages the changes.