What are Indirect Spend Suite Companies Worth?

I try not to blog much about indirect spend procure-to-pay suites (e.g. Ariba, Sciquest, Verian, Coupa, and many others).  (Indirect spend being the stuff bought and consumed by a company, not its customers.) But a quick look at the Wall Street Journal this morning forced my hand.

As you may know, the Wall Street Journal has doubled-down on its tech coverage by renaming its Business section to Business and Tech.  (A good way to attract advertisers and capture the zeitgeist.)  In addition, the WSJ has jumped onto the unicorn bandwagon by publishing a nice website categorizing 73 companies the WSJ has identified as private companies with valuations of more than $1 billion.  If you select only the software unicorns you get the following chart (my emphasis added). 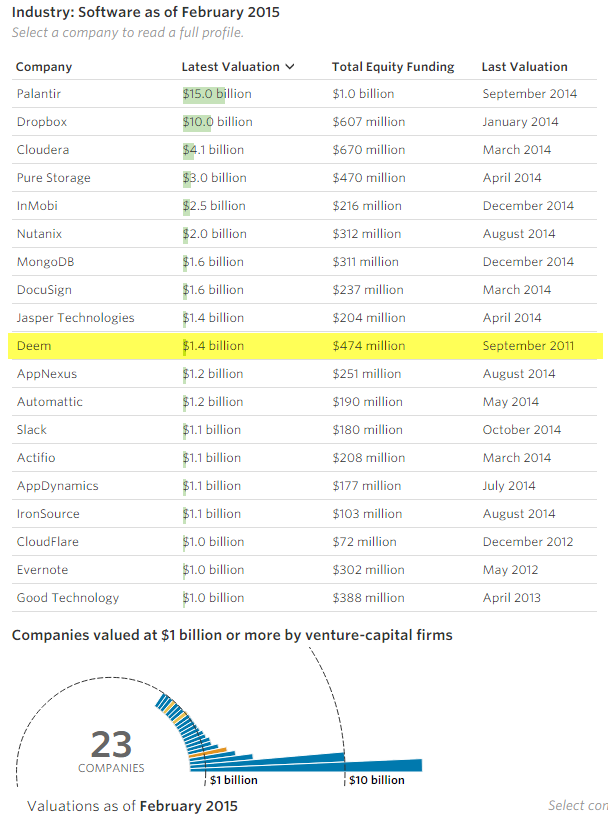 Other than IronSource, an Israeli company I had not heard of, the company on the list that surprised me most was Deem.  Deem stands out in a number of ways:

You may not have heard of Deem because it was previously named Rearden Commerce.  (Deem also bought a company called Ketera along the way.)  For several years (2008-2013) Deem sold a private label solution through banks, so the Deem name was hidden.  But according to a recent company webinar, Deem has re-committed to the indirect spend suite space.  (The company has not pivoted so much over the years as it has re-branded and re-messaged, usually with a flair for the dramatic.)

So who does Deem compete against and at what valuations?  Here’s a handy chart of my own making.  I did not include valuation estimates relative to EBITDA, as that would have required more work and seemed so 2010!

1.  SAP spent approximately $15 billion to purchase Ariba, Concur, and Fieldglass–leaders in indirect procurement, travel and expense, and contingent labor respectively.  Deem’s valuation is 1/10th of this, so if Deem has 1/10th the potential, and if others will pay what SAP did, the valuation would make sense.

2.  The company whose story most parallels the one provided by Deem is Coupa.  (That story being:  “We are newer technology, more user-friendly, integrated T&E, more services-friendly, etc.)  Coupa, like Deem, is private.  Coupa recently disclosed that it has doubled in revenue for the sixth consecutive year–meaning even if it had only $2 million in revenue back then, it has more than $64 million in revenue now. Coupa and Deem share NetSuite as a partner and Coupa  claims more transactions and spend than Deem.  Though the fog of war is thick here.   If Deem is worth $1.4 billion (and that is, again, a big “if”), Coupa is a unicorn and just wants to be quiet about it for now.  (That is more Coupa’s MO than Deem’s!)  (Also note that Coupa has raised less than $100 million relative to Deem’s $474 million in capital.)

3. Sciquest, Basware, and Proactis are all reasonably good public company comparables in the space–though Proactis is tiny and Sciquest is a more verticalized and less T&E-centric.  Their valuations are in a fairly tight range.

Oracle also offers indirect procurement and T&E, but the world is clearly ready for the new pure SaaS Ariba to emerge.  Deem has been around longer and plays the PR game well, but Coupa has likely already claimed that mantle.