GTY Technology and The Year of Living Dangerously

When GTY Technology acquired the six companies, the company put together an impressive 100-page PowerPoint, which included the following revenue projection: 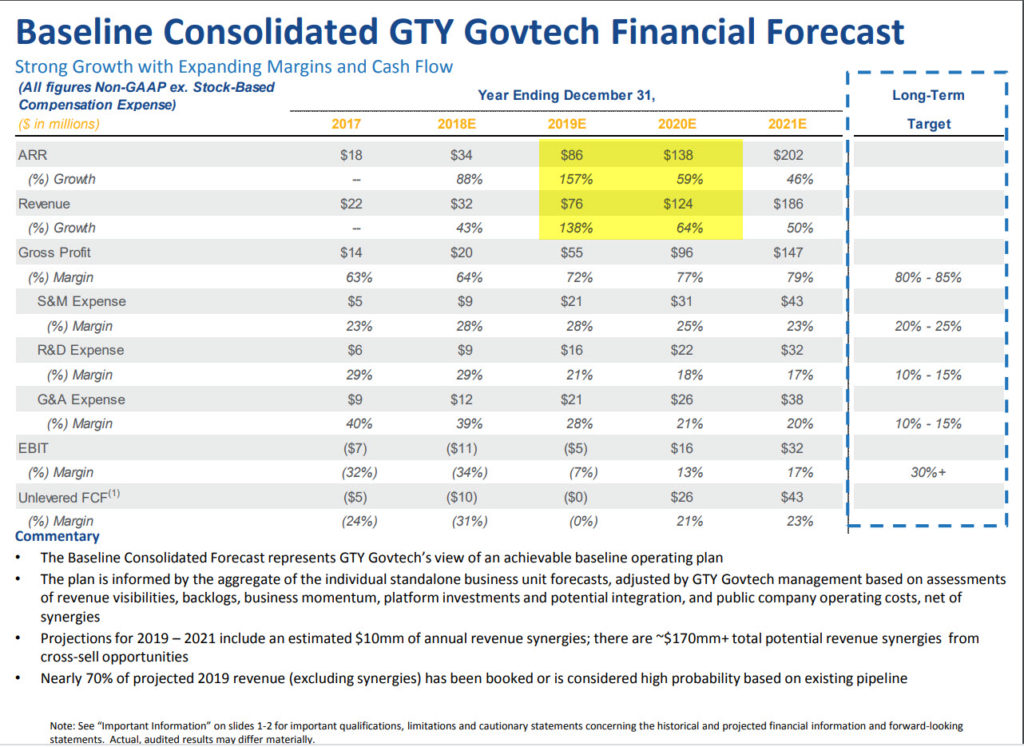 These are eye-popping projected growth rates for any market, I called them “truly incredible” for the public sector.  I should have called them impossible.

In 2019, GTY managed to grow about the same percentage as the year before, nowhere near its projection. The company’s gross profit was just 50% of its 2019 projection.  Despite this lower than expected growth and gross margin, the company still, remarkably, managed to spend 90% of its projected operating expenses. Mind you all of this happened before the coronavirus crisis.  Ouch.

Of course, the combination of these factors is that GTY is virtually out of cash and needs to raise money to be a going concern.  Last week, the company announced a new CEO, COO, and Chairman of the Board.  Credit Suisse has been hired to review “strategic alternatives”.

As long as GTYH was a blank check company sitting on a pile of cash and not spending it, its stock price was steady.  Unfortunately, when they spent the money to acquire the companies, while they bought some very cool companies, they paid a lot of money and then spent $50 million to get $8-10 million in revenue.  That is a good way to destroy shareholder value:

In January of 2019, I said I would wait to buy the stock if the growth did not materialize.  Now its too risky to buy the stock.  Someone (NIC, Tyler Technologies, Vista) will pick up the pieces.

I feel bad for the entrepreneurs whose companies are part of this and the company’s shareholders.  These are called “blank-check” companies for a reason.  You are putting all of your faith in whoever is doing the buying and managing.  Now it’s a blank checkbook company.